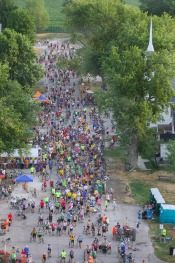 The bicycle business may be awakening to the potential for bicycle events and tourism, as many in the industry push to not only sell more cool bike stuff, but to support more riding.

The industry was represented more than ever at the National Bicycle Tourism Conference held in early November. Many came away intrigued by the potential for stronger ties between the business and bike-related tourism to get more people riding, and buying, more often.

This was the conference’s 25th year of existence. Much of its history was focused on bicycle events, but this seems to be evolving. A broader focus on “bicycle tourism” attracted a range of people interested in bikes, cycling event promoters, advocates, travel professionals, public officials, as well as some from the bicycle industry.

This year PeopleForBikes was the title sponsor, for the first time. Companies in attendance included Primal Wear, Advance Sport International, Pedego, and Bike Friday. Bicycle Retailer and Industry News was represented for the first time, as were the National Bicycle Dealers Association and Bicycle Product Suppliers Association.

The Adventure Cycling Association’s Jim Sayer talked about how bike tourism has become a huge and emerging sector in global and American travel markets. He gave examples of more states and regions focusing on bike tourism as an economic driver. He noted that continental and national bike route networks are growing, with the U.S. Bicycle Route System now encompassing 6,790 miles in 15 states. He pointed to a boom in single-day and short tours and gave examples of how federal and state agencies have boosted support for bike travel. Bike sharing, rentals, events and effective non-profits are also on the upswing, Sayer said.

San Diego Mayor Kevin Faulconer described how his city was benefiting from an emphasis on cycling, including a new bike share program. San Diego Police Chief Shelley Zimmerman, also a regular cyclist, pointed to the additional benefits of bicycles in the city, a factor in making the area much more livable.

Tim Blumenthal of PeopleForBikes described an 85% growth in bicycle use in some cities, with protected bike lanes becoming an important feature leading to more bicycle use. He looked toward a bright future for cycling as millennials pursue a more “compact lifestyle” with less focus on cars, less desire for needless material goods, and a desire to accumulate experiences rather than stuff.

A panel on attracting more women to bicycle touring emphasized the importance of reaching out to infrequent and casual cyclists and making events fun for all people. Events do not need to be hammer-fests, at least not all the time. One panelist noted that 80% of travel decisions are made by women. Attracting women requires respect for all types of riding, and a consideration of fun extras such as wine and cheese tastings, shopping, a spa experience or other side activities. Pampering was one description of how a good event should be run. “It’s about the experience, not the bike” was another comment. Getting rid of the term “sag wagon” for slower riders was also suggested, perhaps re-branding it as a limousine service.

The always important subject of beer was the focus of another session, with a representative from New Belgium Brewing talking about beer and bikes. Other panels discussed local advocacy, working with the industry, marketing and collecting and using data. Others focused on the mountain bike segment.

Bicycle tourism is a big topic with a lot of constituencies and interests at work. Cities and states talk about tourism as a creator of jobs and economic vitality. They invest to compete with each other for vacation business. Charitable organizations use events as fund-raisers for good causes. Event promoters get people riding. The bike trade supplies a lot of equipment and services to support these riders.

This mammoth and growing pile of cold, worn bike parts is a beautiful thing, not because of the inherent beauty of the strewn wreckage of alloy, carbon and steel, but because of what it means for the people who logged the miles. Worn parts are the inevitable byproduct of miles ridden, creating healthier and happier people in the process, and all to be purchased, and then replaced numerous times, over and over in a beautiful dance of commerce, fun, health and transportation. Events and bike tourism help make this happen. Increasing involvement from the bike trade can only lead to good things.